How Crows Use Rocks to Damage Your Property

Have you ever heard someone called a ‘birdbrain’? This relatively tame insult is supposed to imply that the victim is a bit stupid. In truth, there’s really no reason to take offence, since many birds have repeatedly proven to be some of the most intelligent creatures on the planet. Crows and indeed all members of the corvid family like ravens, jackdaws and rooks, are such birds. 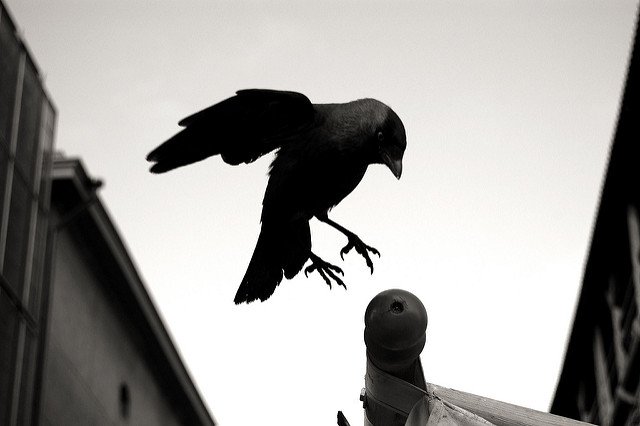 The more intelligent an animal is, the more social they tend to be. They’ll create groups and begin to seek out activities purely for fun. Unfortunately for humans, ‘fun’ often equates to destruction and we can end up with large groups of crows damaging property with whatever tools they can get hold of.

Most commonly, this will simply involve them pecking away at items like the putty surrounding car windows (which is annoying in itself, but can usually be resolved by moving the vehicle). Occasionally however, they upgrade their antics by carrying rocks high into the air and letting them plummet down onto your car bonnet, the roof of your house or even your skylights.

The ways that crows use rocks can cause untold damage including scratched paintwork, dents and cracks and even smashed glass, which of course you’ll have to foot the bill for.

In 2012, a flock of crows was seen pelting several expensive vehicles owned by political figures who were visiting a regional legislative body in Russia. One local lawmaker, Maksim Ryapasov, blogged about the experience, writing, “When leaving the office, I saw a group of drivers of ministers’ and deputies’ cars who were moving chaotically and swinging their arms.” The Russian media made jokes about the rock-dropping crows being politically motivated and described the event as a “bird protest.”

The source of the stones seemed to be a decorative garden on the roof of a nearby building. By the end of the attack, which reportedly lasted several hours, three cars had been left with broken windshields.

Crows will engage in the same behaviour to get food. They’ve been observed on many occasions dropping foods with hard shells onto rocks in order to break them open. This includes walnuts, crabs and other kinds of shellfish.

In Japan, they have even been seen dropping nuts into traffic and waiting at pedestrian crossings to collect the crushed insides. If not for the video proof, this ingenious behaviour would be difficult to believe!

Protecting Your Property From Pest Crows

When it comes to discouraging crows from making your property their playground, it’s best to opt for more subtle bird-proofing tactics. Crows have long memories, and any attempt to go after them yourself or destroy nests will not be easily forgotten (and it certainly won’t be forgiven!). They can easily recall faces and will even pass on warnings about individual humans to their offspring, meaning you’ll have enemies for generations.

We would recommend installing anti-perch spikes or a spring wire system on any flat surfaces of your building where crows and other pest birds tend to roost. The less comfortable it is to hang around on your property, the less time they’ll spend there.

Crows tend to become bored quickly and if you’re not an easy target, it’s likely that they’ll soon move on.

Both anti-perch spikes and spring-wire systems are fairly unobtrusive and aren’t easily seen from the ground, so are a good choice for businesses who need to maintain a professional appearance.

If you’d like to know more about how crows use rocks to damage your property, or need advice on bird-proofing tactics, don’t hesitate to get in contact with Safeguard Pest Control through our online form. Alternatively, our experienced staff are always happy to take your call on 0800 328 4931.

You may also enjoy these articles

We use cookies on our website to give you the most relevant experience by remembering your preferences and repeat visits. By clicking “Accept All”, you consent to the use of ALL the cookies. However, you may visit "Cookie Settings" to provide a controlled consent.
Cookie SettingsAccept All
Manage consent

This website uses cookies to improve your experience while you navigate through the website. Out of these, the cookies that are categorized as necessary are stored on your browser as they are essential for the working of basic functionalities of the website. We also use third-party cookies that help us analyze and understand how you use this website. These cookies will be stored in your browser only with your consent. You also have the option to opt-out of these cookies. But opting out of some of these cookies may affect your browsing experience.
Necessary Always Enabled
Necessary cookies are absolutely essential for the website to function properly. These cookies ensure basic functionalities and security features of the website, anonymously.
Analytics
Analytical cookies are used to understand how visitors interact with the website. These cookies help provide information on metrics the number of visitors, bounce rate, traffic source, etc.
SAVE & ACCEPT
Powered by